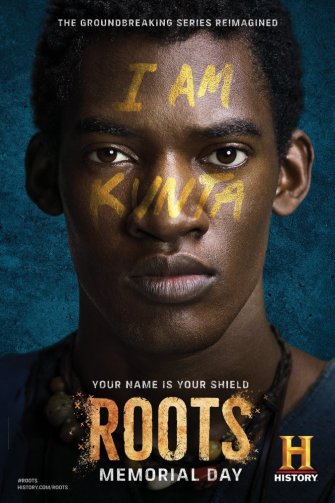 So, yesterday I watched the finale of the Roots tv reboot.

Here are my final final reflections.

So, you may already know, I wasn’t gonna watch…then thanks to blogger Awesomely Luvvie ( On ROOTS Reimagined and Retelling This Classic Story) and other folk I respect I decided to give it a chance. I never saw the original. Usually, I shy away from this type of drama because unless you are a heartless bastard it sticks with you and unless you are a ditzy absentminded sort of person it lingers in your mind even after watching…but I disregarded my usual aversion and I watched episode one.

So first of all, History channel did a GREAT job of filling in some of the holes in the story, that folks expressed about Haley’s original book with facts, figures and real life events of the time. In fact, even though it was based on Haley’s book and ancestors, they stuck to the story Haley told, but interspersed the personal family story, with a History channel style reenactments of real life events and happenings of the time in which the story was set (if you followed them on twitter, they also sent out factoids about the time and the people during the commercial breaks, and also with blurbs at the end of scenes with significant historical impact).

Another thing I applauded, was that unlike with the orignal mini-series, they didn’t go for ANY stunt casting (no white sitcom stars or black pro-athletes in this one). Instead, other than for a couple of the iconic roles (i.e. Fiddler, Kizzy, Tom Lea…) the cast was made up of new, and hopefully, up and coming young actresses and actors of color, including some  for whom the show was their very first real acting job (US or otherwise).  The standouts including Malachi Kirby as Kunta Kinte, Regé-Jean Page as Chicken George, Erica Tazel as Matilda, and a number of other younger actresses and actors.  The casting for the series was really good.

As I expected, each and every scene lingered. but as I watched the first ep and the second ep…I began to see this NOT as a story of victim hood, or airing grievances against white people (though to be fair from this family’s saga standpoint and millions of others who were slaves…the grievances against white folks were valid and should NOT be forgotten or erased from conversation). Anyway, I began to see it as the story of SURVIVORS! From Africa to the Americas…these people SURVIVED all this brutality and came out of it on the other side yes bloodied but ALIVE and in many cases unbowed. So even with the painful acts and lingering anger at the entire institution of slavery in America, I feel blessed to know that I come from generations of these Survivors and I’d like to hope that their stories are told and heard by as many folks as can see or hear them, Black or white.