ICYMI: I’ve already posted the sequel to part 1 of day 2 in D.C. here and you can find the first original post about Day 2 here.  You can ALSO read about Day 1 of the family D.C. trip here.  Please check it em out if you haven’t already.

So  we spent the majority of the 2nd day visiting museums.  All in all we saw like 5 or 6? It was like 5pm and we STILL had not seen any monuments other than the Washington Monument in the distance.  By this time, we’d been walking all day, I know my feet were mostly killing me, and if I had to walk ANOTHER inch, I was gonna shank a bitch…for real.  We’d made it to the Washington Monument, which BTW the NAAHCM (the main purpose of our trip), is literally right across the street from the monument.  Anyway, so it was the end of the day and we’d finally made it to the “monument” segment of the day.

Here we are in front of the NAAHCM and Washington Monument!

After all the walking for the musuem leg of the trip…we were done walking for a while, so we hoped onto the DC Circulator bus ,which is AWESOME BTW, I highly recommend it as the BEST way to get around the National Mall and in one loop for like a dollar each ride.  I’d recommend dividing it up into walking segments if you plan to utilize it.  It has more than one route, the most popular tourist route being the National Mall route, of course.

Since it was after 5pm we decided to just focus on the 2 main monuments we really wanted to see, the new Martin Luther King Jr Memorial and the old standby Lincoln Memorial.  We rode the Circulator to the MLKJr memorial first.

First thing you notice when you get off near the monument is that at street level, it is very unassuming.  Nothing spectacular leading up to the entrance, in the park, so of course there is a lot of greenery.  The street it is on, is not a bustling through way, but you do hear the usual “street” noise.  But as you walk deeper into the memorial area and away from the street, the street noise fades and I swear it becomes eerily quiet. be  Now that could because it was a Sunday evening, and so there wasn’t a lot of people there, but I don’t know, I’d like to think that when you visit the memorial, your sense is to be quiet and reflective…ya now what I mean.

Anyway, as you walk along the pathway leading up to the actual memorial statue, along the walls leading up to the statute on both sides are various inspirational quotes from Martin Luther King Jr from various speeches, lectures, statements, etc.  I didnt’ take a pic of every quote, of which there were many, but I did take a good bit of the more recognizable ones. 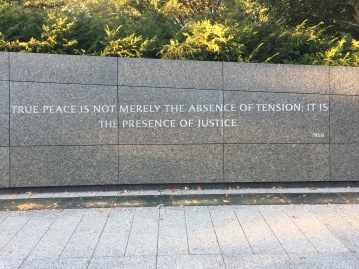 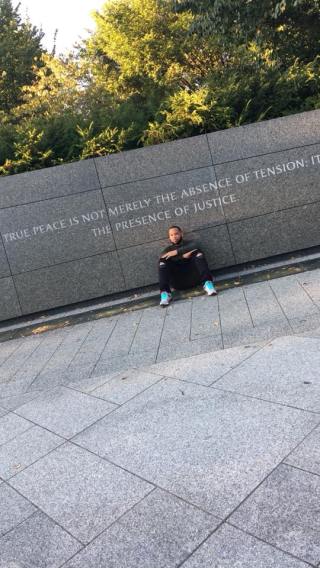 At the center, is of course the actual stone statue image of Martin Luther King Jr.  In person, both smaller than you would imagine, but also bigger, more majestic than imagined as well.  Again, I don’t know if it was just cause it being a Sunday, so fewer people, but you are struck by how tranquil the space is, and how the “outside” noise faiths away.

If I recall correctly, there was some controversy that the statue doesn’t look like Dr. King much if at all, and honestly, unless I held a certified picture of him up next to it, I didn’t notice any outright unrecognizable-ness of the statue.  It was MLK, its majestic and you find yourself thinking about the man, and NOT the statue.  As I said before, there was not too many people when we got there, so we were able to get good pics as a group and individual ones. 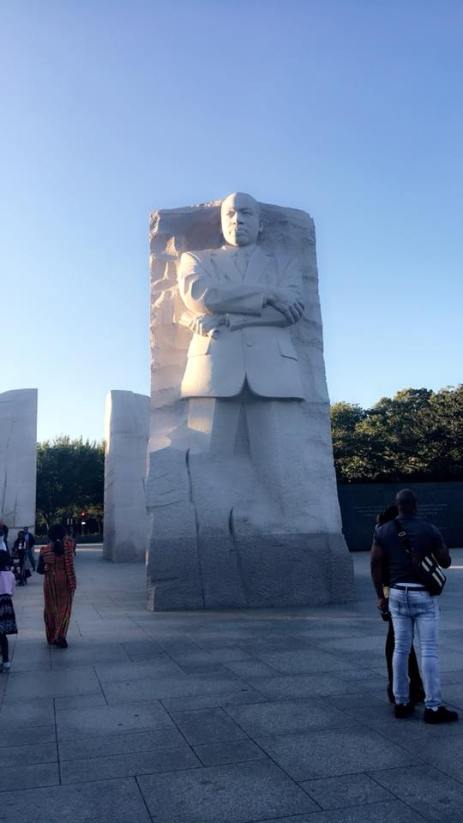 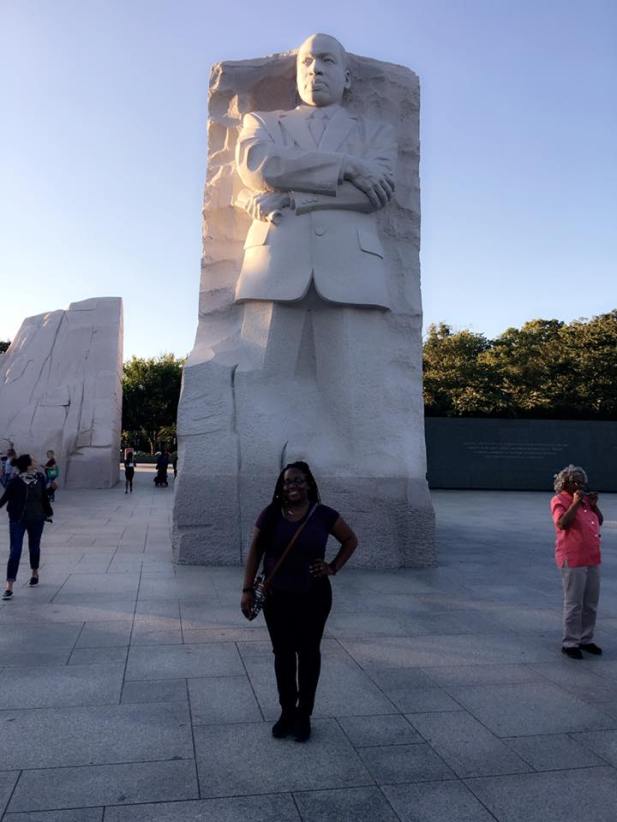 After leaving the MLK Memorial, we hoped back on the next DC Circulator and headed to the Lincoln Memorial..the final stop on our Day 2 museum & Monuments journey.

“In this temple, as in the hearts of the people for whom he saved the Union, the memory of Abraham Lincoln is enshrined forever.”

If there weren’t a lot of people at the MLK Memorial, the same could not be said for the Lincoln Memorial.  There was A LOT of people, still I suspect not as many since it was a Sunday, but still at least a 100 or more people on the stair leading up to the memorial and inside the actual “temple” area.  Also, where the MLK memorial had this majestic eery calmness and quiet, the Lincoln memorial DID NOT.  Still even having more people, the atmosphere was still respectful in not a bit crowded.  We were still able to get some great pics though. 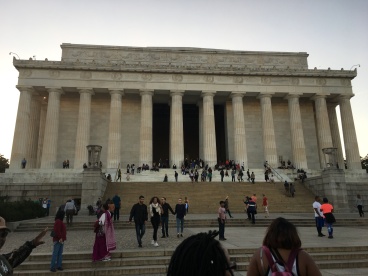 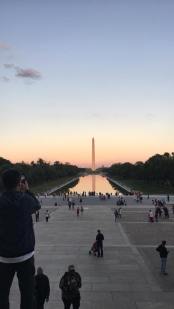 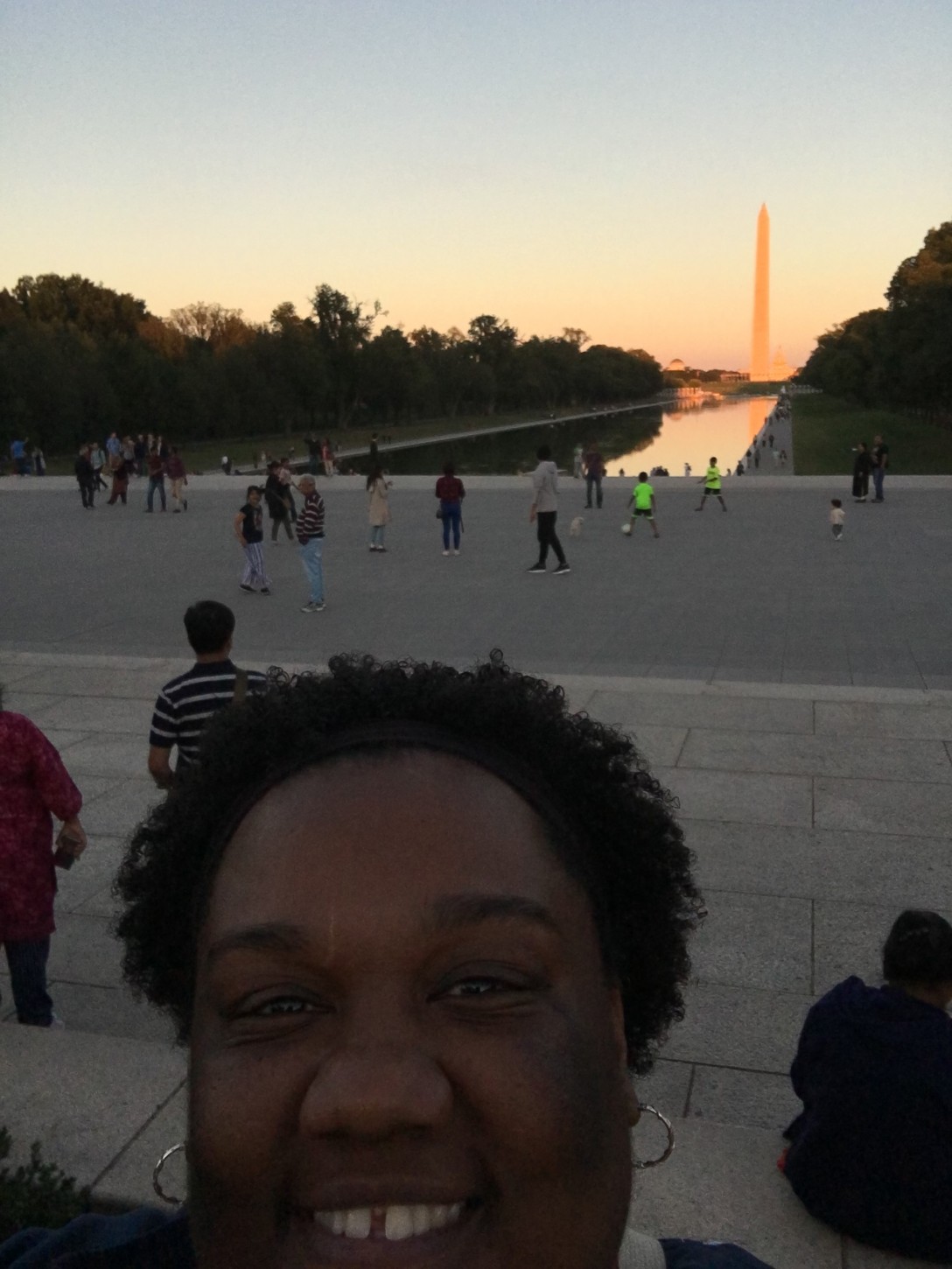 As the sun began to set, we headed back to our hotel via Uber, charged our phones and ventured out one last time to have dinner to celebrate my sister Robin’s birthday.  Her birthday was the central point surrounding the entire trip, culminating in our visit on our last full day to the AAHCM.  Initially we had intended to go to a fancy steakhouse or Italian joint, but instead, due to the time and lack of expense, we ended up at a sports bar called Bar Louie in Gallery Place.  Apparently, there is one in Baton Rouge, where my sister lives.  She liked the food in Baton Rouge, and it was a short walk from the hotel.  Even though it was a “sports bar” the food was great and aside from the waiter who seemed more interested in trying to tell us about the best places to toke up in DC, than getting check correct, it was a good meal and good service.  I especially liked my meal.

We ended the day the same as we did on Day 1, tired feet, sore muscles, and full hearts & minds.  We all fell into the beds at the hotel to rest up for the big day tomorrow….the BIG reason for the entire trip, visiting the Black-sonian.

And that FINALLY it for Day 2 of our Family trip to DC.  But don’t worry, they’ll be more…

The next blog post will be the final one about our family D.C. trip.